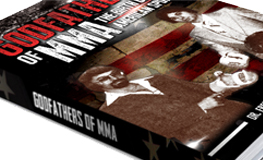 Godfathers of MMA, The Birth of An American Sport.

I’ve been involved in the martial arts for approximately forty years, ­both as a journalist and fighter so I consider myself savvy.  I have to admit, after reading Godfathers of MMA, the new book by Bill Viola Jr. and Dr. Fred Adams, I had to completely reevaluate the historical timeline of mixed martial arts.  This is truly one of the best kept secrets in all of martial arts.  The book sets the record straight on a number of significant milestones, that until now have been completely overlooked by even the most in-depth journalists.

The book opens with a comprehensive outline and summary of martial arts in general and its infiltration into the United States.  The authors do a great job setting the stage and scene for a martial arts revolution.  Most journalists, including myself, believed that the UFC introduced mixed martial arts competition to the United States, but its clear that they were more than a decade behind CV (Caliguri and Viola) Productions.  The upstart martial arts company was established in 1979 after two prominent martial arts promoters, Bill Viola and Frank Caliguri, hatched an idea to create the first “anything goes” sport.  The men set out to answer the age old question of who would win in a “real” fight:  The boxer, the wrestler, the karate-ka?

Mixed contests were popular at the turn of the century, but they were more or less sideshows.  There was no legitimate outlet for full contact fighting and CV Productions filled that void with the inaugural “Tough Guy” contest.  The competition allowed all fighting tactics including karate, judo, wresting, boxing, etc.  They implemented the 10-point-must system for scoring and banned the most dangerous techniques such as biting or groin strikes.

Caliguri and Viola essentially created the blueprint for modern MMA years before the Ultimate Fighting Championship or the Gracie family was on the scene.  Unfortunately, the Pennsylvania State Legislature outlawed the sport in 1983 with the passage of the Tough Guy Law in repsonse to the death of Ronald Miller at a unrelated Tough Man boxing show.  The struggle between the Pennsylvania Senate, Tough Man boxing and shady underworld players are depicted in easy to read entertaining chapters.

Godfathers of MMA is a must read for any martial arts fan.  The amount of research and attention to detail is impressive.  Ten years after the passage of The Tough Guy Law (Senate Bill 632), the first Ultimate Fighting Championship (UFC) would debut in 1993.  “The UFC doesn’t owe them [CV Productions] anything, but they should be thankful for everything.”  That line sums up the saga, as if it wasn’t for the fluke death at the Tough Man event, the UFC as we know today wouldn’t exist. What I learned was Pittsburgh was indeed the birthplace of MMA. It’s an incredible journey back in time introducing you to the colorful characters who paved the way for the sport of MMA.