The history of mixed martial arts MMA in one simple #infographic 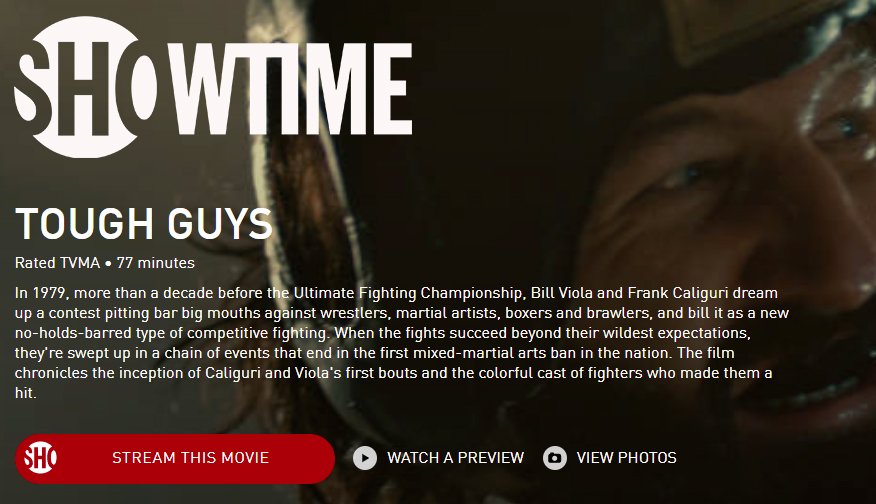 MMA Before the UFC?

The best kept secret in mma 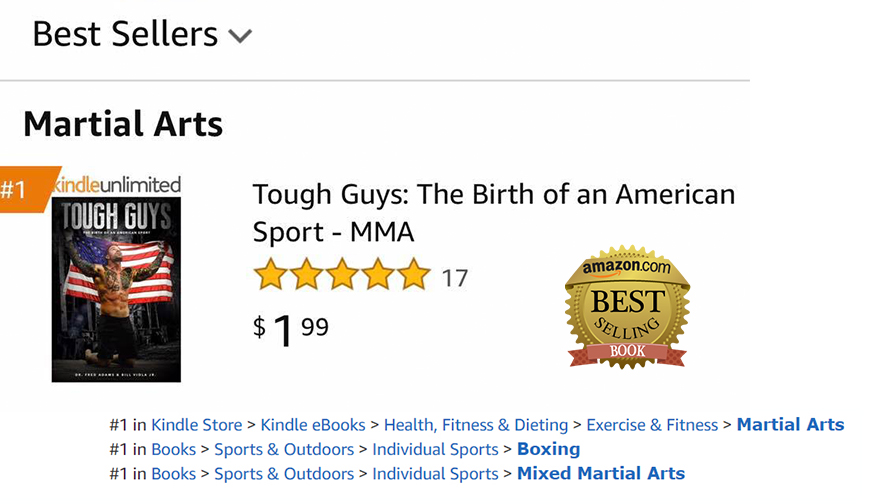 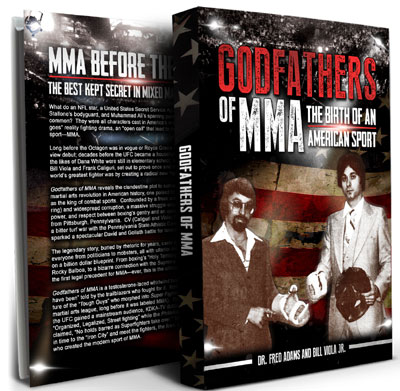 What do an NFL star, a United States Secret Service Agent, Sylvester Stallone’s bodyguard, and Muhammad Ali’s sparring partner all have in common?  They were all characters cast in America’s original “anything goes” reality fighting drama, an “open call” that led to the birth of a new sport—MMA.

Long before the Octagon was in vogue or Royce Gracie made his pay-per-view debut; decades before the UFC became a household brand and while the likes of Dana White were still in elementary school; two martial artists, Bill Viola and Frank Caliguri, set out to prove once and for all who the world’s greatest fighter was by creating a radical new “sport” in 1979.

Godfathers of MMA reveals the clandestine plot to subvert the “first” mixed martial arts revolution in American history, one poised to challenge boxing as the king of combat sports.  Confounded by a freak accident (death in the ring) and widespread corruption, a massive struggle ensued over money, power, and respect between boxing’s gentry and an upstart MMA company from Pittsburgh, Pennsylvania.  CV (Caliguri and Viola) Productions ignited a bitter turf war with the Pennsylvania State Athletic Commission that sparked a spectacular David and Goliath battle for leverage.

The legendary story, buried by rhetoric for years, casts a wide net reeling in everyone from politicians to mobsters, all with ulterior motives; all with eyes on a billion dollar blueprint. From boxing’s “Holy Territory,” the home of Rocky Balboa, to a bizarre connection with the Supreme Court that lead to the first legal precedent for MMA—ever, this is the ultimate inside look.

Godfathers of MMA is a testosterone-laced whirlwind tale of “what might have been” told by the trailblazers who fought for it.  Relive the epic adventure of the “Tough Guys” later known as Super Fighters (the first mixed martial arts league in history).

Take a journey back in time to the “Iron City” and meet the fighters, the foes, and the visionaries who created the modern sport of MMA.

Dr. Fred Adams is a western Pennsylvania native who has enjoyed lifelong love affair with literature and film.  He holds a Ph.D. in American Literature from Duquesne University and recently retired from in the English Department of Penn State University.  He has published over 50 short stories in amateur and professional magazines as well as hundreds of news features as a staff writer and sportswriter for the now Pittsburgh Tribune-Review.

In the 1970s Fred published the fanzine Spoor and its companion The Spoor Anthology.  In 2014 his novels, Hitwolf, and Six Gun Terrors were published by Airship 27, and his nonfiction book, Edith Wharton’s American Gothic: Gods, Ghosts, and Vampires was accepted for publication by Borgo Press.  Three additional novels by Adams are currently pending publication.

Adams acted as the official press agent for CV Productions Inc., the first mixed martial arts company in America (1979-1983).  He sat ringside covering the radical new sport for the media and is credited with coining the phrase, “The Real Thing in the Ring.”

Fred is also an accomplished singer/songwriter who has performed solo and with bands since the early 1960s and over the last few years has recorded two compilations of original material, The Doctor is In and Searching for a Vein.

Bill Viola Jr. is a Pittsburgh, Pennsylvania based promoter and international martial arts champion who experienced the “Golden Era” of MMA firsthand as his father, Bill Sr., is credited as the co-creator of the sport.

He established Kumite Quarterly magazine in 2003, serving as publisher and overseeing distribution throughout North America until 2007.  Viola is an accomplished freelance journalist, contracted by Sport Karate Magazine to cover the National Black Belt League World Games on location in Mexico, Canada, and across the United States.

Viola has also served as an independent consultant for number major motion pictures including the mixed martial arts movie Warrior (2011).  He is also credited as an Associate Producer for the MMA inspired film Tapped Out (2014) starring former UFC champions Lyoto Machida and Anderson “Spider” Silva.

Bill teaches martial arts at the same school his father established in 1969 (Allegheny Shotokan). He is part of a growing Pittsburgh karate legacy that that now includes his daughter, Gabriella Capri Viola.

Mixed martial arts in the United States was not conceived by the Gracie
family and Art Davie in 1993, it actually began life 14 years earlier
in a Pennsylvanian diner. FO reveals the untold story of…

The history of the sport of MMA began in Pittsburgh, PA.  Photos circa 1979

November 1979. The world’s favorite Stars Wars film is yet to illuminate a single silver screen, Jimmy Carter was walking the halls of the White House and a gallon of gas cost less than a dollar down the road from the Denny’s restaurant in Monroeville, Pennsylvania, where two kickboxing promoters, Bill Viola Sr and Frank Caliguri, would meet once a week. Bill, a 33-year-old karate school owner and school science teacher, and Frank, the 32-year-old proprietor of the only karate gym in Pennsylvania with a boxing ring, were talking business. However, unlike every previous week’s Denny’s conversation, this one would lead to holding the United States’ first-ever mixed martial arts league. And this was nearly 15 years before the 1993 debut of what would become the world’s largest MMA organization: the Ultimate Fighting Championship. Bill and Frank would converse about their efforts promoting their co-promoted karate and kickboxing events. As publicizing primarily entailed hanging posters in gyms and bars, they’d frequently encounter clientele keen to point out a martial artist they knew could pummel any kickboxer on their show. “It would keep coming up,” Bill Viola recalls to Fighters Only. “Then one night, we were just there like we always were, having a little bite to eat, and we both almost simultaneously came up with this idea: what happens if we get all these guys together and do an event?” As men fascinated by the question of who would win between jeet kune do creator Bruce Lee, boxer Muhammad Ali and wrestler Bruno Sammartino, they needed no more encouragement. Only days later, Bill began hashing out a rule-set, picking the brains of the judokas, and other martial artists who visited his shotokan karate gym’s unique open door Wednesday night, where the practitioners could share techniques. He also visited with his school’s wrestling coach on his free periods to hit the mats. What resulted was a remarkably thorough 11-page rulebook that outlined regulations (fights to end by knockout, submission, referee stoppage or decision), safety gear (head guards, If you would like to sign up for automatic school appropriate games closing notifications for participating schools, please visit Delaware Notification Services, create an account and subscribe to school appropriate games notifications. karate gloves, foot and leg protection) and even judging criteria for a 10-point must system. There would also be two physicians, one ringside and one in the dressing room. In 1979, mixed martial arts was already light years ahead of itself. Soon Viola and Caliguri were brainstorming names. ‘Ultimate Fighting Championship’ wasn’t in their top 10, Bill admits with a laugh. “We may have had a little blunder there,” he jokes. Seeking a title that would echo the tough ethos of their Steel City Pittsburgh locale, Bill and Frank would first settle on ‘Tough Man Contest.’ Though it seemed perfect, within months, they would get their first hint of why the moniker wasn’t as shrewd as they’d hoped. Unaware, the pair created flyers and posters to spread the word. Seeking fighters for, as the promotional material promised, an “anything goes” event “as they fought in the Orient,” but to find “the real-life Rocky” was easier than they anticipated. Bill marvels: “It was unbelievable. We would get 150, maybe 200 (calls), for a tournament or kickboxing show. First week we got 1,500 phone calls. We didn’t know what to do. We were totally engulfed. We had to actually hire a real secretary. We knew from that point this was going to be huge.” They immediately scheduled a three-night event, March 20th, 21st and 22nd 1980, at the Holiday Inn in New Kensington, Pennsylvania. However, by now, Bill and Frank (who had formed CV Productions – the ‘C’ for Caliguri, the ‘V’ for Viola – to stage the shows) received word of a gritty amateur boxing event in Michigan already using the title ‘Tough Man.’  Not wanting to be associated with a pure boxing contest, a simple name change to ‘Tough Guy’ ready for the second round of posters was in order. As Bill recalls, those booked for the first shows in New Kensington were a local ragtag crew of wrestlers, boxers, karate fighters, martial artists and, just as the UFC would attract well over a decade later, brawlers. Having selected simply via first come first served, Bill and Frank had gathered a tournament bracket of 32 lightweights (175lb and under) and a separate grand prix of 32 heavyweights (176lb and over), all to compete over three two-minute rounds with the finals read more